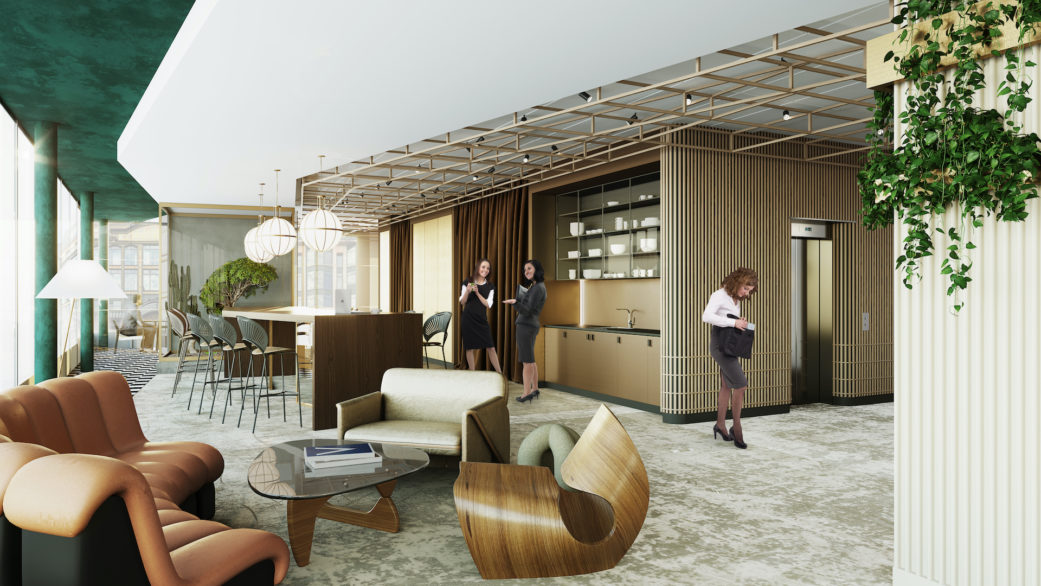 LVMH Moët Hennessy – Louis Vuitton is a famous French luxury goods brand. Our client was participating in a pitch for the redesign of their Paris headquarters. The timing was tight, therefore they tasked us with creating these beautiful LVMH office renders in the shortest possible deadline.

Earth, Water, Fire and Air were the concepts for the four spaces of this project, of which we visualized three. This is because the designers did not have enough time to properly design the fourth concept.

Otherwise, we could have put an extra visualizer on the project and produce four renderings even in this very short timeframe.

The first one of these LVMH office renders is the open office space. Water was the concept for this area’s design. As you can see on this render, every detail reminds us of water’s smoothness and fluidity. These include the soft wavy fabrics, the cool-blue color pallet and a rippled mirror band on the ceiling.

The theme of the cafeteria space is earth, so it’s design mostly consists of warm wooden tones and greenery. A light transparent structure suspended from the ceiling not only reminds us of tree branches but also hosts the lighting. A neutral grey carpet flooring is reminiscent of a rock’s surface and adds to the overall elegance of these LVMH office renders. 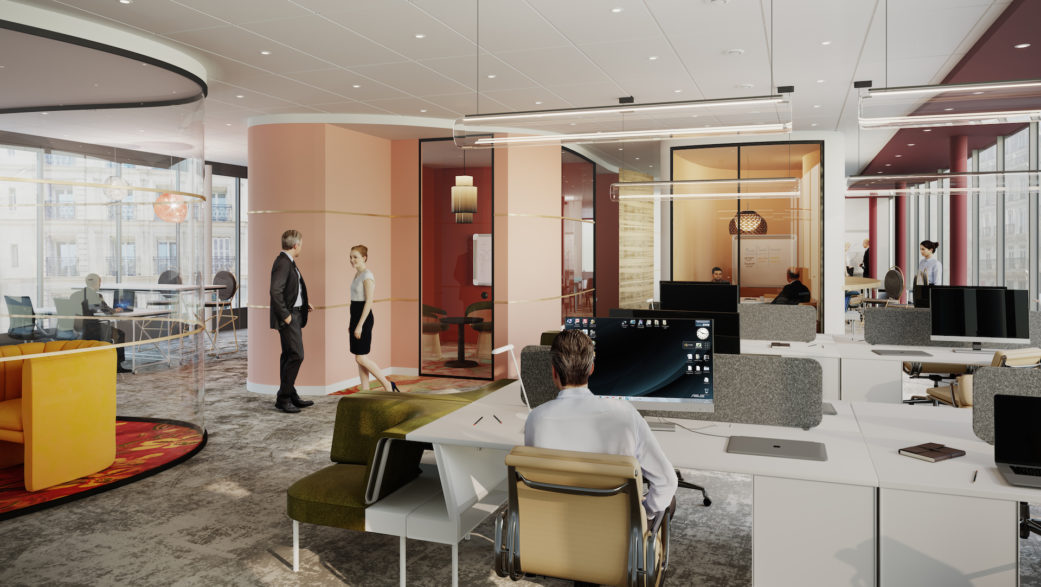 The concept for the meeting room area is fire. That is why on the last visual you see a mix of bright oranges, yellows and lava reds. The client wanted us to illustrate the functionality of this space by placing more characters in it than the others.

Due to the time constraints, here we had to use 3D people models instead of the usual 2D cutout silhouettes. This is faster because they are to scale and seamlessly integrate into the scene in terms of lighting.

Another advantage of using 3D people is that you place them directly in your model and not in Photoshop during post-production. Since these LVMH office renders were developed in parallel with the design, our process had to be flexible.

Using 3D character models left our client more time to finish this area’s briefing. Once everything was confirmed – all we had to do was to hit render. When this image came out in HD we only had to apply minimal color correction to it.

This website uses cookies to improve your experience while you navigate through the website. Out of these cookies, the cookies that are categorized as necessary are stored on your browser as they are essential for the working of basic functionalities of the website. We also use third-party cookies that help us analyze and understand how you use this website. These cookies will be stored in your browser only with your consent. You also have the option to opt-out of these cookies. But opting out of some of these cookies may have an effect on your browsing experience.
Necessary Always Enabled
Necessary cookies are absolutely essential for the website to function properly. This category only includes cookies that ensures basic functionalities and security features of the website. These cookies do not store any personal information.
Non-necessary
Any cookies that may not be particularly necessary for the website to function and is used specifically to collect user personal data via analytics, ads, other embedded contents are termed as non-necessary cookies. It is mandatory to procure user consent prior to running these cookies on your website.
SAVE & ACCEPT